From the multi-award-winning author of Orangeboy, an addictive mystery that refuses to let you go long after you turn the final page. Can Becks piece the jigsaw together and find her sister before Silva loses herself?

Becks is into girls but didn’t come out because she was never in. She lives with her mum, stepdad, and eighteen-year-old Silva, her stepdad’s daughter. Becks and Silva are opposites, but bond over their mutual obsession with K-pop.

When Becks’ mum and stepdad go on honeymoon to Japan, Becks and Silva are left alone. Except, Silva disappears. Becks ventures into the forbidden territory of Silva’s room and finds the first of eight clues that help her discover her sister’s secret life.

Meanwhile, Silva is on a journey. A journey to make someone love her. He says he doesn’t, but he’s just joking. All she has to do is persuade him otherwise…

It is my honour to be the very first tour stop on the Official Eight Pieces of Silva Blog Tour! Now, between Koreadathon and The Reading Rush, I haven’t had much time to truly delve into this book, but for my stop today, I thought I would introduce you to this story by showing you a few things that excite me about this story!

Patrice Lawrence is an awe-inspiring UKYA author, as Orangeboy was such a powerful and emotional book that featured a Black British boy. As a result, I have no doubt that I will love Eight Pieces of Silva. But anyway, let us get on with Five Reasons Why I’m Eager To Read Eight Pieces of Silva.

Yep, you heard me right!

The main protagonist of this book, Becks, is queer. I’m super excited to see if it plays a role within the story at all. It’s also the fact that we are told from the synopsis that Becks likes girls too, it’s something that’s told to us right away and that alone makes me super happy. Especially seeing a queer girl in UKYA too, like WOW.

Queerness isn’t something that’s often discussed in UKYA as we’ve seen through the recent years. However, with the (albeit, slow) progression that UKYA is now taking, it is refreshing to see more queer characters of `colour in literature, especially from a YA book set in London.

There’s something about when books feature aspects of our current society that really gets me going. One such aspect is the influence of K-Pop in our modern day culture! It’s no secret that most teens nowadays are listening to K-Pop groups, I mean, I’ve been listening to k-pop for almost eight years now!

What I’m truly interested in discovering is which groups Becks and Silva stan, and who are their biases, if Eight Pieces of Silva go into that much depth. Do they only stan BTS? Or do they stan other groups like Red Velvet, EXO, TWICE, TVQX, NCT etc.? Only time will tell!

It’s safe to say though, I do hope one or both of them are Reveluvs. How could you not stan such an innovative, powerful and amazing group? And Irene & Seulgi’s subunit debut AND THEN NAUGHTY??
UNRIVALLED. UNMATCHED.

I am guilty of not reading enough mystery novels. Recently, I read The Silence of Bones by June Hur as part of Koreadathon and now, because of that, I am hungry for more mysteries. Seeing the fact there are eight clues leading to Silva’s secret life really intrigues me because it leaves a lot to be desired by the novel!

Although, I know Patrice Lawrence’s writing and I know it’s going to hurt the more we uncover things about Silva’s life. But, it’s definitely not to say I’m not excited. It’ll give me a chance to channel my inner Sherlock Holmes and attempt to solve this mystery before Becks does.

Knowing me though, that probably won’t happen. I fall for red herrings more often than I would like to admit.

Here, in my opinion, is where Patrice Lawrence’s writing shines. Orangeboy was filled with emotional and familial tension and I’m thinking Eight Pieces of Silva will contain some similar aspects. I feel there will be tension between the two step-sisters throughout the novel in Becks’ attempts to understand her new step-sister better through her clues.

I want to hope that the both of them will be okay in the end, but only time will tell. Every family has certain aspects of drama and Patrice Lawrence is able to write it so well, and make it so relatable to the British Black reader, it actually fills my heart with pride when I read her work. (It also makes me teary-eyed but let’s not get into that)

My last reason is perhaps my most important.

UKYA is lacking in diversity, we know this through the CLPE’s Reflecting Realities reports. We know UKYA has a lot of work to do before we can truly acknowledge that it is improving its stance on diversity.

Supporting this book. Supporting a Black Woman who has written a book that has made me cry, and this book, that will hopefully take me on a similar journey. Especially in this current climate of the Black Lives Matter movement, everyone needs to show their support for Black people, and this is a great step.

And there you have it friends, five reasons why I’m personally excited to read Eight Pieces of Silva! But, before we wrap up this post and draw it to a conclusion, Patrice has asked me to share with you one of the clues that is linked to this blog tour. And so, I present to you…

I am super excited to be the first stop on this tour, but be sure to check out Ben’s blog for the next stop tomorrow!

Patrice Lawrence was brought up in an Italian-Trinidadian household in Mid Sussex. This meant great holidays and even better food. She found her way to east London in the ’90s and has acquired a cat called Stormageddon. Her first novel, Orangeboy, won the Waterstones Book Prize for Older Readers and the YA Book Prize, and has been shortlisted for many others, including the Costa Book Prize. She has been nominated for the Carnegie Award three times. Her ideal mixtape includes drum ‘n’ bass, Bruce Springsteen and music from Studio Ghibli films. Music can’t help creeping into her books.

Joel Rochester is a Black Welsh bisexual creative, a self-titled Prince of Pocpoc Stories, and Scion of the Sun. Joel advocates for more diversity in literature, particularly more QPOC representation. When he isn’t suffering under the pressure of a degree, he writes stories about emotional soft boys, daring fantasy worlds, and intriguing tales. Joel is currently working on The Dream Prince. 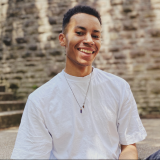 %d bloggers like this:
We use cookies to ensure that we give you the best experience on our website. If you continue to use this site we will assume that you are happy with it.Ok